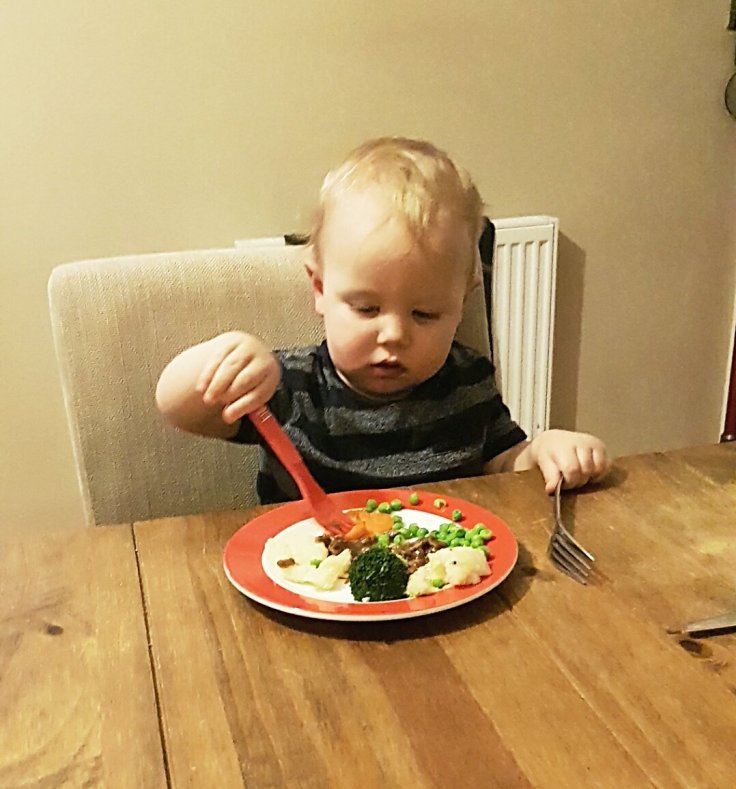 We are currently living in purgatory and quite honestly the Catholics played it down. We are one foot in “baby”, one foot in “big boy” and balls deep in “malfunction junction.”

For a few weeks River has been observing us and how we go about our daily actions such as eating lunch and dinner. He’s watched us sitting at the table and picking up our cutlery and enjoying our meals in a pantomime way so as to encourage him to eat his. He’s watched all this from his high chair with his baby bamboo plate and plastic LFC spoon and he’s decided done with it. Now when we try and put him in his high chair he arches his back and lifts his legs up like we are trying to dip him in lava.

Fine, I thought, fair enough. He wants to be a “big boy” so I’ll get him a “big boy” booster seat and he can sit with us at the table whilst I age 25 years worrying that he’s going to tumble sideways off (which he did) or fall face first and smash out his new teeth (which he didn’t.) This step however has been too overwhelming and he isn’t happy with the arrangement. He want’s to sit at the table but he wants to sit there on a mummy knee. Sometimes I wonder if he would be more content if I just filmed myself shredding the money I throw at all these comfort items for him to just ignore.

I get it, it’s a big deal. He’s not ready and it’s a scary world sat by yourself when you’re nose barely scrapes the edge of the table but why does he act like we are placing him in concrete boots when trying to revert back to the comfort of the highchair?! I just want to eat my food without a frustrated eel wriggling up and under my arms and pushing my plate away because he’s finished with his. I say finished, he’s in such knots about it all at the minute he’s barely starting. Even the big guns of baby foods (beans, fish fingers etc…) won’t tempt him to stray from his teenage-esque sulk.

The other in-between we are experiencing his speech. He is SO FRUSTRATED because he can’t tell us what he wants that our non-ability to translate caveman grunts and vague pointing results in full-blown crying. It comes from no where. We will be reading a book and because we don’t read the page he wants he will burst into tears. We have to quickly puzzle out why Spot the Dog has caused such heartache before bed when it can be as simple as because we haven’t got to the page with the Moon on it fast enough. (As an aside, he can’t say Moon but tries so hard that he ends up “mooing” at the Moon. It’s very sweet.) He lost his shit with Frankie yesterday because she put on his morning t.v. shows and walked away to fix his breakfast when all of a sudden he came running in to the kitchen with the remote and grunting.

“I’m not sure what you want?!” At this point he took Frankie by the hand, dragged her to the t.v. and put his hand on his head like a shark fin and did a Fred Flinstone run on the spot. “Ah, Baby Shark?” He laughed, finally! He looks at us like we are idiots.

We are working on his communication as there is only so far in life “all gone” and “go go go!” can get someone, but in the meantime I can’t imagine how annoying it must be for a little guy to be trying to tell us what he wants to do and we just stand there like giant morons bellowing and looking confused. I would’t be surprised if his first full sentence is “Look, I’ll just do it myself!”

Life in the in-between is tough; I miss the baby and I can’t wait to meet the big boy but the satisfaction of getting something right for him and getting a big cheesy grin, belly laugh and sloppy kiss makes all the cold meals worth it.